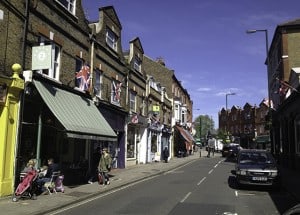 Residents at 20 The Barons are fortunate enough to find themselves at the centre of St Margarets Village, an area that combines the best of two worlds. It has a mainline railway station only 9 miles west of central London, yet retains the local atmosphere, community spirit, independent shops, and friendly pubs and restaurants of an old-fashioned village. Here we take a tour of St Margarets Village.

Tucked into an eastward curve of the Thames as the river progresses south to north, St Margarets is a parish of the London Borough of Richmond Upon Thames. Developed around the railway station that opened in 1876, its tree-lined streets see Victorian and Edwardian villas mingle with houses built between the wars. Covering a pear-shaped area, it is bordered to the north and west by the River Crane, to the east by the River Thames, and to the south by the Richmond Road, beyond which spread the riverside parks and stately homes of East Twickenham. Isleworth lies to the north, Twickenham to the south and west, Richmond across the river to the east.

Our tour begins with a short stroll from the train station to The Barons, where you will find Twickenham (TW1) Film Studios. The beating heart of St Margarets, and still thriving today, the studios date back a century to 1913 when they were built on the site of an old ice-rink. They played host to The Beatles for A Hard Day’s Night (1964), Help! (1965) and Let It Be (1970), and the Fab Four filmed several scenes around local streets such as Ailsa Road. The studios’ many film credits include Zulu (1963), Alfie (1965), The Eagle Has Landed (1976) and The French Lieutenant’s Woman (1981).

A few strides from TW1 Studios you can enjoy a pint at St Margarets Pub and Tavern, a spacious and welcoming gastro-pub that stands at the junction of two prime shopping streets. Pointing south is Crown Road, whose delights include Vintage & Velvet, a treasure trove of vintage homeware; The Secret Wardrobe, a designer dress agency; Birkett Bespoke Tailoring; the exclusive styling of Dolly Rock; GAIA Wholefoods’ organic produce; the fresh bread and patisserie of La Boulangerie; and Zoran’s Delicatessan, with its legendary breakfasts and charming host. At the end of Crown Road is the newly re-vamped Crown pub serving fabulous pub food and wonderful evening meals in its beautiful restaurant. Pointing east to Richmond Bridge (and Richmond’s many wonders beyond), St Margaret’s Road is host to excellent independent shops including Armstrong’s Family Butchers and Streets Florist & Greengrocers, plus the local Post Office without which no proper village would be complete.

Tear yourself away from the shops in search of some history by heading south off St Margaret’s Road, and down Sandycombe Road to spot the blue plaque on Sandycombe Lodge. This was built in 1814 for J.M.W Turner, who painted many of the panoramic views that make any walking tour of St Margarets a delight. Turn left at the end of Sandycombe Road and head along Richmond Road to reach St Stephen’s Church, built in 1875 beside St Stephen’s Passage on a piece of land whose triangular shape explains why the church faces north rather than the traditional east. Look for fine Victorian stained-glass, and stone columns carved in the shapes of flowers from the garden of Henry Little, the first People’s Churchwarden.

South of Richmond Road, which forms the notional border between St Margarets and East Twickenham, glorious historic parks and houses adorn the north bank of the Thames. Walk south from St Stephen’s to Marble Hill House, a Georgian villa set within the 66 acres of Marble Hill Park. The magnificently proportioned house was built in 1729 in the Palladian style for Henrietta Howard, Countess of Suffolk, mistress of King George II, and friend to Alexander Pope, Jonathan Swift, John Gay and Horace Walpole.

Continue to the south-west corner of Marble Hill Park to discover Orleans House and Gardens. This Palladian villa was built in 1710 for the politician James Johnston, and named after the visiting Duke of Orleans. Much of the house was demolished in 1926, but the outbuildings and baroque Octagon Room survived and now house the excellent Orleans House Gallery and Stables Gallery. From the woodland gardens, you have the option of catching a ferry across the Thames to the National Trust’s Ham House, a seventeenth-century mansion built in 1610 and said to be haunted by the ghosts of the Duchess of Lauderdale and her dog. You could alternatively continue west to nearby and beautiful York House Gardens and the unique community at Eel Pie Island.

To continue our tour, follow a two-mile riverside walk east across Marble Hill Park; through Meadowbank and past Glover’s Island; through Cambridge Park Gardens and Cambridge Gardens; up to Richmond Bridge, built in 1777 on the site of the old ferry; up Ducks Walk to Twickenham Road bridge, and on up Ranelagh Drive, all the while enjoying the views across the Thames. You will eventually reach Richmond Lock and Footbridge. It was near here that Sir Archibald Kennedy, Lord Cassilis, 1st Marquis of Ailsa, built a new house in 1830 on the site of Lacey House. He called it St Margaret’s House, after the patron saint of Scotland, which is the source of the parish’s name. The house was itself demolished and replaced in 1851 by Kilmorey House, the residence of Jack Needham, 2nd Earl of Kilmorey, which itself no longer stands.

Ranelagh Drive joins St Margaret’s Drive which you can follow to the junction with St Margaret’s Road to enjoy a well-earned drink at the Ailsa Tavern. Just north of here on St Margaret’s Road is a hidden gem. An old, black door leads through a brick wall to Kilmorey Mausoleum. This grade II building, in the style of an Egyptian shrine, was built in 1854 by Jack Needham, 2nd Earl of Kilmorey, for his mistress Priscilla Hoste. It was once connected to nearby Gordon House by a secret tunnel, through which the Earl’s servant pushed him on a trolley, dressed in white and laying in the coffin that in 1880 became his eternal resting place. Well, St Margarets has never been short of eccentric local colour!

Head south along St Margaret’s Road to return to the railway station, and consider the street names—Kilmorey Gardens, Gordon Avenue, Ailsa Avenue—that commemorate the 19th-century landowners whose houses and estates grew into the unique community that is today’s St Margarets.