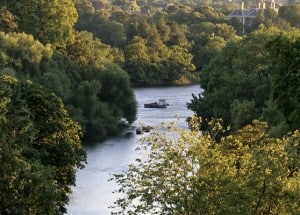 “Glide gently, thus forever glide,
O Thames! That other bards may see,
As lovely visions by thy side
As now, fair river, come to me.”

‘Lines written near Richmond, upon the Thames, at Evening’
—William Wordsworth, 1798

What would St Margarets, Twickenham and Richmond be without the seductive curves of the River Thames to shape them? Water carrier, flowing transport, drain and floodplain, bringer of food and goods, home to birds, beasts and fishes, playground to sailors and anglers, the bearded god Old Father Thames is rightly worshipped by Londoners as the patriarch of the settlements on its fertile banks. It is the artery that feeds London’s heart, with millennia of what politician John Burns in 1929 called “liquid history” in its wake. To Londoners, it is simply ‘The River’.

Starting as a trickle in the Cotswolds, at Thames Head, near Cirencester, the Thames travels for 215 miles, east into the heart of London, on through the North Kent Marshes, and out into the North Sea. The Thames Path follows it for 184 miles from its source to Greenwich, the longest riverside walk in Europe. Downriver from Teddington Lock, the river is tidal as it passes Twickenham, part of the Tideway that has a rise and fall of 7 metres. Its majestic sweep through Richmond-upon-Thames inspired Wordsworth and beguiled Turner.

The river has ebbed and flowed over the centuries. Old maps show many more islands or ‘aits’, than today, in what was a wider, shallower, slower river. There was a settlement at Twickenham, alongside Twickenham Ait (today’s Eel Pie Island), in 704. By medieval times, the river was dotted with water-mills, eel traps, and fish-weirs constructed from stakes and brushwood. There also began a dirtier tale from the riverside. In 1357, Edward III wrote: “Dung and other filth had accumulated in diverse places upon the banks of the river with… fumes and other abominable stenches.”

Before turnpike roads and railways, the river was the main highway. Stood on the Richmond riverbank in the sixteenth century, you might have seen Elizabeth I (1533–1603) making her royal “progresses” along the river between palaces at Greenwich, Westminster, Whitehall, Richmond and Hampton Court, each with its own wharf. Records show the relevant expenses: “To Louis Walter, bargeman, for conveying the Queen’s Grace from Richmond to Greenwich… in her barge with twenty-one rowers, every rower taking eightpence, fourteen shillings.” Over the centuries, those who wished to ride the river were frequently hampered by the weirs of those who wished to harvest its trout, salmon and eels. The river slowed to a dawdle with the completion of Old London Bridge (1209), and froze over completely in 1607 when the first Frost Fair was held. A tented city rose up on the ice, people played ice-bowling, and an elephant was walked across the river! In less severe times, commercial barges carried timber, wool, food and livestock from Oxford past Richmond to London. They used sails, but had to be hauled upstream by men and horses. Moses Glover’s 1635 map depicts two horses pulling a barge past Twickenham Ait. In Peter Tillemans’ ‘A Prospect of Twickenham’ (1725), which you can view in Orleans House, a barge is hauled by five labourers known as ‘scufflehunters’. It was not until the Thames Commissioners were established in 1770 that work began removing obstructions and adding locks, creating a deeper, more clearly defined river. The towpath at Richmond was established in 1789.

Tempted by the views that so inspired Wordsworth, the great and the good built their houses along Twickenham’s riverside. Twickenham Park (1609), Cambridge House (1610), York House (1635), Orleans House (1710), Marble Hill (1728) and Richmond House (1816) combined to present “an idea of luxury which the utmost labours of the pen would vainly endeavour to impart.” Word of the splendid views also travelled abroad. In 1737, William Byrd, gazing along the James River in Virginia, USA, and recalling similar vistas along the Thames, gave his new city the name of Richmond.

Through the nineteenth century, the Thames glided beneath a coat of filth into the industrial world. In 1811, the lock was built at Teddington, to improve navigability upstream. The new London Bridge of 1825, with fewer piers, increased the flow of water, and the building of the new Thames embankments between 1864 and 1870 created today’s narrower, deeper, faster river. But pollution from industrial waste and raw sewage from cesspits, flush toilets and drains overwhelmed the river and all but obliterated fish stocks. In the hot summer of 1858, London’s infamous Great Stink saw Parliament suspended because its members could bear the stench no longer. Old Father Thames began to clean up his act thereafter with Joseph Bazalgette’s massive sewage system. Twickenham’s drainage was complete in 1882, and in 1894 Richmond Lock and Footbridge was unveiled.

Today, a far cleaner Thames is home to abundant wildlife, from mute swans to kingfishers, from salmon to seahorses. Dolphins and porpoises progress up the river, and gray seals have been seen as far as Richmond. Setting out from 20 The Barons, you can trace the ‘S’ of the Thames as it winds around St Margarets, from Eel Pie Island up to the south-west corner of Kew Gardens, following the Thames Path on either side of the river. You might prefer to catch the historic Hammertons Ferry from below Orleans House across to Ham House. Or you can cross the river at Richmond Bridge and stroll to Richmond Landing Stage, where a river bus will carry you along the Thames upriver to Hampton Court, or all the way down to Westminster. What better way to gently glide! 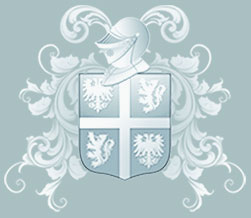